What a December it’s been for Christmas party magic!!!

As the resident magician at Arbuckles, I spent 14 nights during December performing for all of their Christmas bookings at their Downham Market branch. I also had to supply another magician to work alongside me for 5 off those nights which really made a difference as normally during Christmas you’re working on your own. I also provided a 3rd magician to perform at their new venue in Ely as well so it really shows how popular having a close up magician can be.

In addition to Arbuckles I had a blast performing at Kineton Station Mod in the sergeants mess for their Christmas party and had an amazing time working alongside the very talented caricaturist Mengistu. He kindly took the time to draw me and you can see the likeness below (Thanks for the extra chin!!) 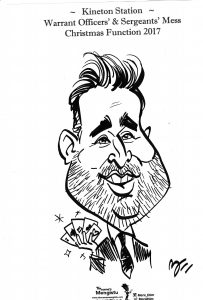 Then there was a booking for Dobbies Garden Centre in Kings Lynn, as well as a lunchtime booking for elifesciences too to round it all off.

And now it’s done for another year, and its back to the grind again for 2018 which is shaping up to be bigger and better than ever!

So Happy New Year to you all, and if you are looking for a magician for your wedding, party or corporate party then don’t hesitate to contact me as I guarantee to make it as amazing and memorable for you in every way possible!

DROP ME A LINE